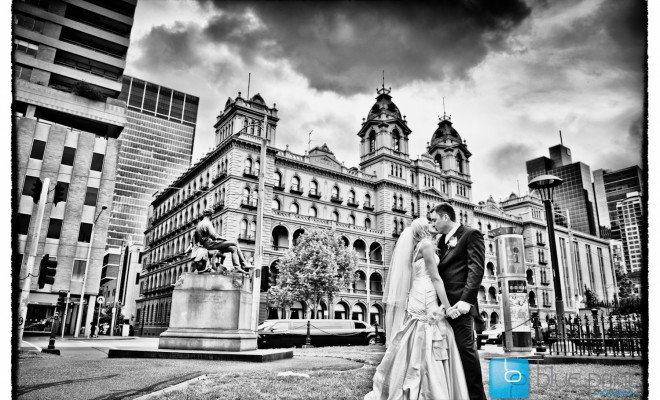 Pictured rolling up to see the guys getting ready, dancing, with an empty bottle of Vodka lying around.  Vitali and the boys were relaxing, having a few laughs getting ready, but no empty bottle of Vodka. OK maybe the girls might have some of the good stuff. Upon arriving at Oksana’s place, I was greeted by five very excited Jack Russells, and Oksana slipping into her stunning Martina Liana dress and PiotrAntoni shoes, and mum wrapping the traditional Russian wedding bread but still no Vodka.

The ceremony was held at the Russian Orthodox Church in Brunswick with it’s golden cupolas that represent the flame of a candle, burning upward to heaven. Orthodox ceremonies are breathtaking,  filled with such timeless traditions.Vitali’s best man was doing very well holding the golden Crowns over their heads as the priest led them three times around an Analogion symbolizing the pilgrimage of their wedded life together. The  Hotel Windsor was next for photos as that’s were Vitali had proposed to Oksana. The classical theme was topped off with photos at Butleigh Wootton where there reception was held. Finally that elusive imported Russian Vodka bottle made an appearance on the bridal table.